3 Issues Faced by the Recycling Market: The impact of conflict, resolutions, and climate change | MikaCycle

The recycled plastic market is one that spans multiple industries and is increasingly expanding. There are many factors that influence the market such as virgin resin prices, large brand commitments, and available infrastructure. Recently, there are three big factors impacting the market—climate predictions, major plastic treaties, and conflict in Ukraine. Extreme weather events can largely impact global supply chains, as occurred with hurricane Ida and Nicholas, from which businesses were still recovering from when the invasion of Ukraine began and the UNEA agreed on creating a plastic treaty. The conflict between Ukraine and Russia has had major economic repercussions through talks of sanctions and support for Ukraine. This has in turn led to major oil price increases and changes to the supply and demand chain. Additionally, the recent Plastic Treaty that the United Nations Environment Assembly (UNEA) plans to unveil in 2024 has influenced the direction many businesses and governments are likely to go in with regards to plastic consumption, production, and disposal.

Hurricanes Ida and Nicholas in August and September of 2021 caused major production and price interruptions. Climate change is likely to exacerbate and increase the frequency of extreme weather events like hurricanes. Due to events like these, businesses are beginning to focus more on climate and the need to not only take immediate weather events into account but also plan ahead on how climate predictions in regions of operation will affect shipping and manufacturing activities. Not only does climate change affect the way these businesses can operate but people are also becoming more aware of how the plastic industry affects climate change. A report by the Center for International Environmental Law, released in May 2019, concluded that the impact of plastic production on the world's climate in 2021 would be equal to the output of 189 coal-fired power stations. By 2050, plastic production is expected to triple and be responsible for up to 13% of our planet's total carbon budget. Almost all plastic is derived from materials (like ethylene and propylene) made from fossil fuels. The process of extracting and transporting those fuels, then manufacturing plastic creates billions of tonnes of greenhouse gases. Currently about 4% of the world's annual petroleum production is diverted to making plastic, while another 4% gets burned in the refining process.

The ongoing conflict in Ukraine and sanctions on Russia has also impacted the costs for goods, both for resin manufacturers and buyers as oil prices are hitting 14-year highs. The oil price volatility from this conflict could increase virgin resin prices, making recycled resin more competitive but also impact supply chains. This impact is not felt equally across the globe. For example, in Asia, producers are more affected by the increase in oil prices because they use Naphtha, an oil derivative used to produce PE, while in North America, producers more commonly use natural gas. In addition to an increased price for oil, plastic recycling companies are also dealing with increased container prices. In some instances, having to pay up to $15,000 compared to the usual $2,000. These kinds of fluctuations make it more difficult to sustain and incentivize recycled plastic investments and businesses.

Recycled content commitments from big brands have continuously increased over the last years and they will continue to impact most recycled plastic markets but not equally across resins. The HDPE markets are likely to be most impacted due to packaging demands. Most recently, the UNEA passed a resolution to release a legally-binding plastics treaty by 2024. Once in effect, it would have a similar power to that of the Paris Agreement. It aims to establish global ground rules to eliminate plastic pollution. What is notable is that it does not solely apply to marine litter, it addresses the entire life cycle of all plastic, from production and design, use and reuse, through to disposal and environmental dispersion. The treaty will have to recognize the variety of players involved in the plastic industry, including those that have contributed the most to plastic pollution (i.e the United States and the packaging industry) and ones who’s livelihood still depends on it (i.e informal waste pickers). Additonally, it will have to address issues such as whether it will limit pollutiuon by limiting production, which at the moment exceeds 400 million metric tons/year and continues to trend upward. If so, it would have to face strong disagreement from oil and gas companies that look to plastics as a key area of growth and income. However, as with the 2015 Paris Climate Agreement, the impact of any deal depends on how member nations choose to implement it. As these national governments retain their powers under any treaty, it's difficult to expect nations like the U.S. to put a hard cap on virgin production. The negotiating committee will also have to take into account supply-chain transparency, sustainable production, product design, circularity, and plastics’ impact on human well-being. For the next two years, the committee will have to negotiate on recycling standards, product design and financing of better waste management, which are necessary in obtaining a more circular use of plastics. It will likely also bring about more discussions about plastic additives and building blocks, the degree (or not) of their toxicity, and the impact that will have if more recycled materials are to be in our products. 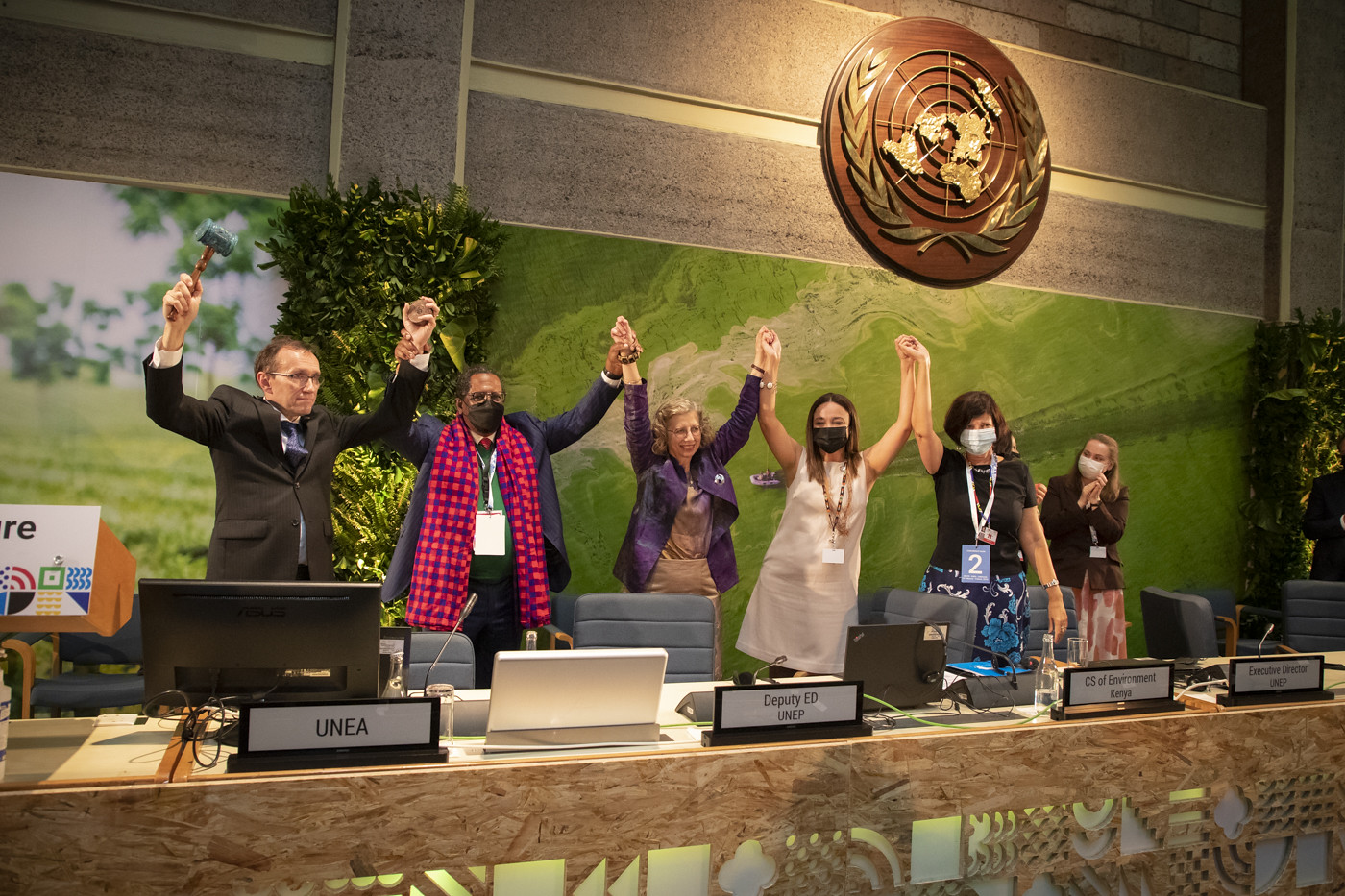 The treaty comes at a time when many large brands are making commitments to incorporate more recycled content, when nations such as the UK have committed to a plastic tax to incentivize an increase in the recycled content of products, and when more individuals are concerned about sustainability and climate change. Plastics production causes harm throughout their life cycle, releasing toxic and planet-warming greenhouse gases during production, landfill and incineration. All in all, these various factors are influencing companies’ decisions to use recycled plastic, the feasibility of following through with those commitments, and the tools, infrastructure, and investments that are required to address these challenges in the effort to properly scale plastic recycling and combat plastic pollution and climate change.